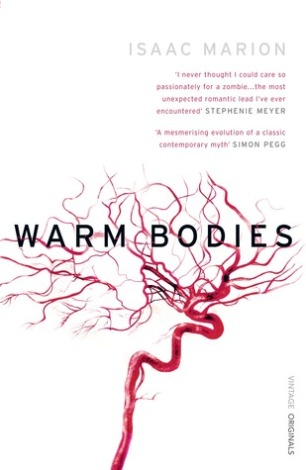 “R is having a no-life crisis–he is a zombie. He has no memories, no identity, and no pulse, but he is a little different from his fellow Dead. He may occasionally eat people, but he’d rather be riding abandoned airport escalators, listening to Sinatra in the cosy 747 he calls home or collecting souvenirs from the ruins of civilisation.

And then he meets a girl.

First as his captive, then his reluctant guest, Julie is a blast of living colour in R’s gray landscape, and something inside him begins to bloom. He doesn’t want to eat this girl–although she looks delicious–he wants to protect her. But their unlikely bond will cause ripples they can’t imagine, and their hopeless world won’t change without a fight.”

What I absolutely loved about this book was the whole idea of the main perspective being from a zombie. This is obviously very unique and rare, which is a part which drew me to the book and added a lot of awesomeness (for lack of a better word!).

The main character (who was a zombie, if you haven’t already picked that up) was pretty awesome. I liked how the author showed how he was different and not just plainly told the audience.

What I really loved, was the whole idea of the girl saving him from becoming a ‘monster’ / zombie’ which was really cute. I felt like the author did a great job with this idea.

Some parts of the book were quite funny and I found myself laughing at things that R would say because they were not only true but also quite funny.

Overall I enjoyed this book, it was a light read. However, I felt like it was just that. It’s very different from what I usually read, which was kind of fun, but in the end, I don’t think I will be converted to reading zombie books from now on.

“I want life and in all it’s stupid sticky rawness”

“Even in my bravest moment, I am a coward”

“But I’m not afraid of the skeletons in Julie’s closet. I look forward to meeting the rest of them, looking them hard in the eye, giving them firm, bone-crunching handshakes”

“I want to change my punctuation. I long for exclamation marks, but I’m drowning in ellipses”

“In my mind I am eloquent; I can climb intricate scaffolds or words to reach he highest cathedral ceilings and paint my thoughts. But when I open my mouth, everything collapses”

“You should always be taking pictures, if not with a camera then with your mind. Memories you capture on purpose are always more vivid than the ones you pick up by accident”

I’m rating Warm bodies 3 out of 5 stars. Yes, I did enjoy the concept and how different it was, but I don’t think I absolutely loved it to pieces and would put it on a pedestal with shining lights.