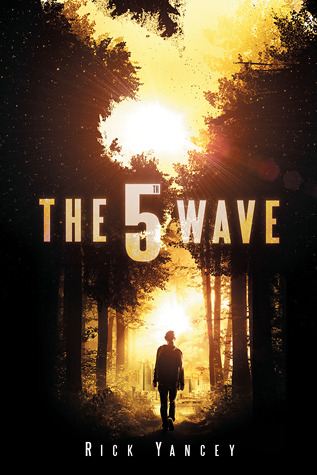 Now, it’s the dawn of the 5th wave, and on a lonely stretch of highway, Cassie runs from them. The beings who only look human, who roam the countryside killing anyone they see. Who have scattered Earth’s last survivors? To stay alone is to stay alive, Cassie believes until she meets Evan Walker.

Beguiling and mysterious, Evan Walker may be Cassie’s only hope for rescuing her brother-or even saving herself. But Cassie must choose: between trust and despair, between defiance and surrender, between life and death. To give up or to get up.”

I really did enjoy this book, it kept me entranced as I flipped the pages. I really loved how the perspective changes and we gained Cassie, Sammies and the silences POV. I loved how the author had unfolded all the details about the world, it wasn’t to slow or to fast, which made me feel like I wanted to read and find out more (which is definitely a really good thing).

The world itself was very well created and described. I loved how Yancey changed the scenes up a bit, and the characters moved around in different places. I felt by doing this it kept me more engaged with what was happening and thinking where they would go next on their journey.

I really also loved the characters, and I really felt what Cassie was feeling when her little brother was taken away from her and she wanted to fulfil her promise to find him (since I have a little sister, I feel like I would do anything for her). This devotion really made Cassie my favourite character, she was very well written. She’s fierce, loving, naive and completely devoted to her family. However, I must admit she did annoy me at points and I felt like she should have done things differently.

The only thing I would pick at would be that the author does at times waffle on a bit in some scenes. When Cassie was with the Silencer after being shot at by the others, that whole scene after when she was debating whether or not to trust him and what not was very frustrating. She would run away make her mind up then go back to him then be completely confused again and it would go on.

I would definitely recommend this book to those individuals who really enjoyed the Hunger Games. It was kind of similar in a way but different and interesting with the whole alien theme.

“My eyes have never been looked deeply into, or my chin raised to bring my lips within an inch of theirs. I was the girl in the background, the just-friends or – worse – the friend of a friend, the you-sit-next-to-her-in-geometry-but-can’t-remember-her-name-girl. It would have been better if some middle-aged collector of Star Wars action figures had found me in that snowbank”

“Then my baby brother slaps that damned bear out of my hand and crushes his face against my chest, and beneath the odours of sweat and strong soap I can smell it, his smell, Sammy’s, my brother’s”

“It’s almost dawn. You can feel it coming. The world holds its breath, because there’s really no guarantee that the sun will rise. That there was a yesterday doesn’t mean there will be a tomorrow”

“We’re here, and then we’re gone, and it’s not about the time we’re here, but what we do with the time”

I’m rating The 5th Wave by Rick Yancey a 4 out of 5 Stars. This book was really good and I did enjoy reading it, but it did have its moments. I would definitely pick up the next book in the series because I really want to know what happens next.

Today my dreams came true, I got to pat and hold a little pug doggo as it snored in its sleep. My heart has never been happier💕😭
Only a few more weeks till the end of this university semester and I cant wait. I'm counting down the days till winter break 😁📖
"Stars flickered around us, sweet darkness sweeping in. As if we were the only souls in the galaxy" - A Court of Frost and Starlight
I enjoyed reading A Court of Frost and Starlight, it was nice to find out what happened to my favourite characters after the craziness of the last book. Have you guys read it yet, and what are your thoughts? A review will be up on my blog soon 🙌📖 OH! And Happy Mother's day 💕💕
I went to the bookshop yesterday and bought 'Six of Crows'. I've heard some great things about it and thought I would give it a go. It'll be my treat for finishing this coming week and the assessments that are due. SOS. 😭📖
Hey guys! Its definitely been a while since you've all heard from me. I had some time to read 'A court of Frost and Starlight' by Sarah J.Mass this week and it brought me right back. Uni is stressful, but what's new right? Anyway, just wanted to say hello. I'll be around this space more often and trying to communicate with you and find out what I've been missing out on since the last time I was here. So yeah. How are you all? 😊💕📖
After a very, very long break I'm back! There's also a new book review available on my blog so go and check it out when you have time!😊😊 . #goodreadswithaview #currentlyreading #universitybreak #sunshineandbooks #beachreads #becsbookshelf
So stressed! Sorry guys, posts may be irregular after today uni is kicking my butt 😩
Another beautiful book that's been on my TBR for a loooong time 😩 I really need to start reading more 😂